A downloadable game for Windows

300 warriors left Sparta to stand between one million Persians and the fate of Greece in the Pass of Thermopylae. After days of battle, 299 Spartans fell nobly. Now, only you can stop the invaders and protect the freedom of your people.

For Sparta is a fast-paced single-screen action game that boasts roguelike features such as gameplay changing items and procedural monsters’ waves creation in an arcade-like arena.

You play as Leonidas, King of Sparta and warlord. As you battle to stop the endless waves of Persians, you will gain new and exciting items, each with its unique ability to help you forge that perfect run.

In order to download this game you must purchase it at or above the minimum price of $1.99 USD. You will get access to the following files:

It's possible to reach a state where the enemies are outside the map and refuse to return.  I'm not sure what triggered this, but maybe one of my blueprints had knockback or one of the enemies decided to run away from me due to heavy use of shielding? 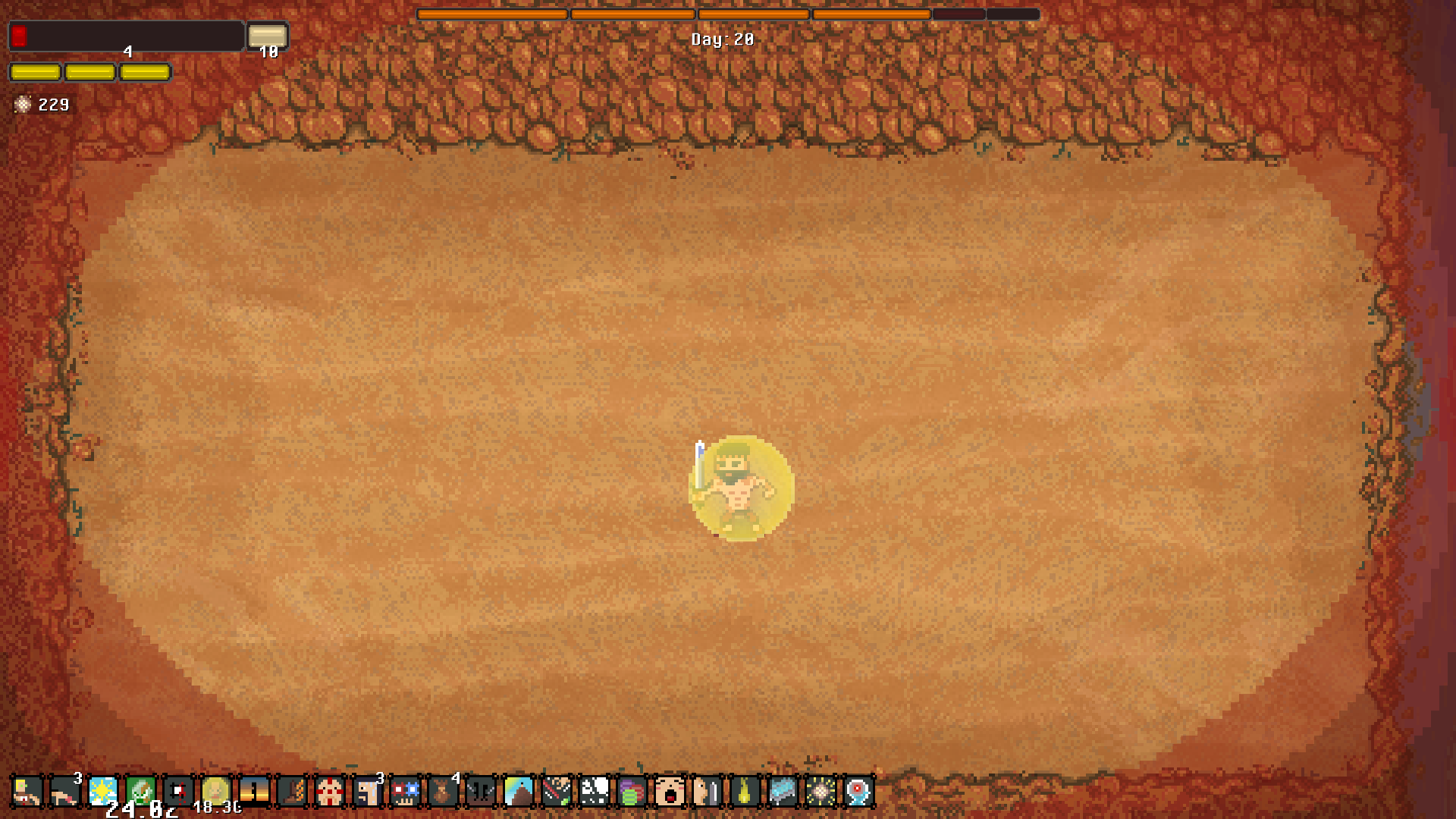 Found and Fixed the bug! :D

I also did several balancing improvements in the 1.2.3 version, including nerfing the Rage of Sparta by reducing its ammo count to 2 and preventing ammo regen when the shield is up, like you suggested. It's really awesome now! :)

There were several other small things there. :)

Nerf Rage of Sparta as follows:

I would also suggest reducing the ammo count to 2 and/or dropping the buff time by 25%.

Currently, it's very easy to get blueprints such that a player is always able to refresh Rage of Sparta on first shield blink (i.e., well before the shield runs out).  For example, by combining Rage of Sparta with Quick Breath.  Similarly, Other shield buffs (Vitamin D, Blessings from the Bronze House) make it very likely that a player can complete a stage without ever letting their shield vanish.

In contrast to the perpetual spear generator, this combo is not particularly fun, since it basically means the player is immune to all damage.

Alternative approach, which is perhaps complicated enough to deserve a custom mode rather than a pick-up:

After picking up Rage of Sparta, immunity (regardless of source) behaves as follows:

Obviously I've provided way too much detail for a proper item description.  So I'd use a description more like this:

Below is a screenshot of my Rage of Sparta setup. 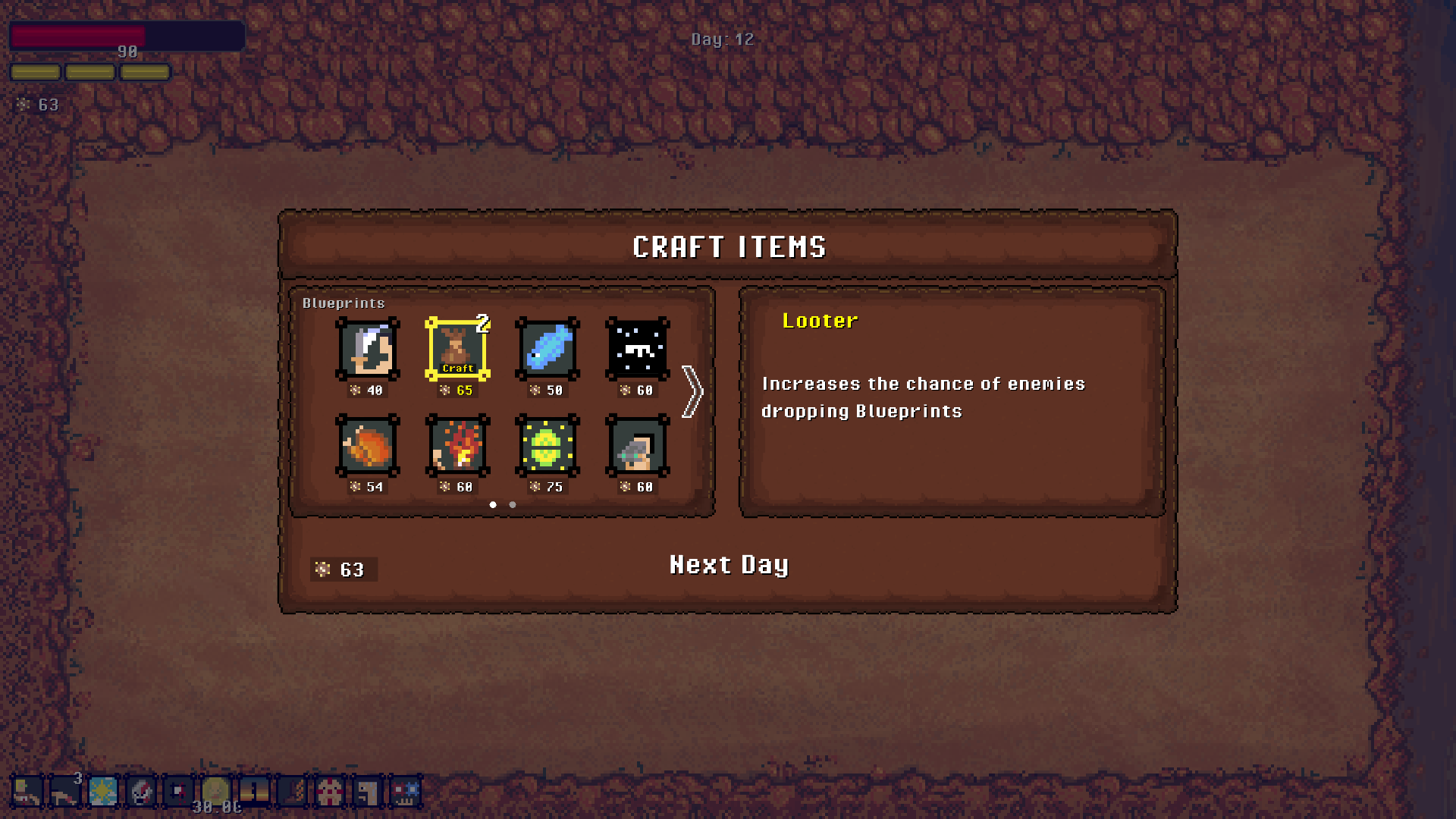 To add insult to injury, Rage of Sparta shields can stack.  Which certainly was great when I later collected a second and third Quick Breath.

Just uploaded version 1.2.3 with these improvements and noted the other suggestions as well! :)

I unintentionally froze the game by creating a perpetual spear generator.  This requires piercing, ricochet, magnetic spear, and a small pile of invulnerable enemies (i.e., shield enemies).  I sent a more detailed description over e-mail.

Thanks to your very detailed explanation by email of this bug I was able to fix it (without preventing the awesome item combination you got! I worked on the spear collision system instead.)

An option to sell unwanted blueprints for essence would be nice.

you could also add a bestiary and it should work like this, when you kill a new enemy it appears in the bestiary with some info about the enemy.

Thank you for the suggestions! We'll definitely keep in mind for future updates!

this game is really hard and not worth 1.99 USD i just got huge amounts of shield enemy’s on only day 2

Maybe your next run will be better? :)

There are +200 items for you to craft. Surely you will get one that makes the game easier and more fun for you.

Awesome game, I recommend maybe a store where you can purchase heals or any other stuff but besides that this is awesome!

We have a couple of ideas of adding different game modes, and one of them could have tons of Blueprints unlocked so you can craft them at will. :) Thanks for the suggestion! :)

Other mode suggestions.  Probably some of these should be unlockable:

Basically, vengeance is for when a player had an especially fun setup and wants just a little more time to enjoy it.  However, probably the player will have trouble getting as far, since they can't get more blueprints (e.g., food).

Some really cool ideas you had there! Thanks for sharing them. :)

I wrote them all down to implement and play around with when we add more content (most likely after the Steam release!) :)

Minor bug in the version launched today: If you die with a campground available, the campground remains when you retry.  The easiest way to cause this to happen is to die via damage while possessing the, "kill all enemies if you take damage with less than 20 health" item.

Feature suggestion: A "catalog" menu which displays a grid of all blueprints.  Obviously, any blueprint that has never been encountered would be filled with a question mark.

Thanks for letting me know!

Is it possible for you to send me the latest log file (should be located in the "logs" folder where you unzipped the game)?

You can send over it to contact@gamecraftstudios.com

The catalog sounds really cool! We want to implement something like that as a post-Steam-launch update. :)

Every log file is an identical 243 byte file (other than the changing timestamp and version number).  The most recent log file is below:

That's really strange... Because I fixed this exact bug (dying in the "Press E to make camp" state would keep this state active) a few releases back.

I quickly tried replicating it now but I couldn't make the bug happen. I will investigate it further. :)

Maybe it's specific to dying in that state via the "kill enemies when taking damage while below 20 health" item?

I have just reworked how the game resets after the player dies and now it should be physically impossible for this bug to happen! :)

This game looks amazing! (haven't downloaded it though😭). I have a question. Is this going to stay free and when will a full game come out?

Ok, thanks for the reply!

I'm glad you liked it!

You are such a good player! It was a joy watching you play! :D

But next time you see the ghost, you ATTACK HIM IN FULL FORCE!!

I will share your gameplay video on our social media. :)

This is a masterpiece :)

one of the best indie game i've ever played

time for constructive feedback:
-I would recommend to have the player always look towards the cursor, not only when actually attacking.
-Make the level itself more attractive. You could easily randomize some parts on the ground and put some decoration on it. That would massively improve the overall look and feel

I will experiment further with the points you mentioned. :)

I just released a new build where the player always looks towards the cursor!

I think it's way more responsive now. Thanks so much for your suggestion! :)

I would love to know what you think.

Yeah feels a lot better in my opinion. You work with Unity? If so, add Controller support (dual stick) and make a mobile version with adds. Just one day of work and you have a fully finished game, making Add revenue ;)

I personally would make the difficulty raise a bit more shallow...but I am very bad at bullet hell games, so I am not the key audience :D

But we will release on Steam on March 22nd for $1.99. Hopefully a lot of people will like the game over there as well. :)

Other people also said that there is a spike in the difficulty, I think I might make it smoother indeed.

Than I don't know how difficult controller support would be^^
But especialy if you are aiming for steam I would give it a try. Bullet hell is often played with a controller.

If you are talking about PC gamepad support, we already have it :)

I have just worked on the level art and I think it looks way better!

I focused on the "border details" to leave the main area clear for the gameplay to happen.

I would love to know what you think about the improvement! :)

I really like it. That gets the atmosphere a lot better. Always impressive how much of a difference such small details can make.

Hiii, I've made a video about the game and wanted to share some feedback about it, hopefully it is useful for the development :D

-The main concept is pretty interesting.

-The visual style is quite good and fits very well the game.

-I really like all the gameplay mechanics that you have implemented on the game as they feel pretty solid and fun.

-I think that the game has a lot of potential and that, with some extra polish on making the game a little bit easier on the first round and some other minor tweaks, the could have an strong base to star adding some extra details and extra mechanics to make it a little bit more engaging.

In conclusion, the idea is great and I hope you keep working on it. Hopefully this is useful for the development :D, also if you could subscribe that would help me a lot :)

Thank you so much for your comment and gameplay video! I shared it in our social media. :)

Your feedback was really nice!

I have just uploaded a new build improving the main point you mentioned regarding the difficulty in the first round.

Now, the first and second days have fewer monsters so you can learn their behavior.

PS: I just subscribed as well! Best of luck with your channel. :)

Thanks for the support and good luck with the game, it has a lot of potential ^^

The player's gold collection hitbox is just a little bit smaller than I'd like.  It doesn't feel comfortable.

Thanks for the suggestion!

I'll try to improve those points for the next update.

I just updated the game and made the gold hitbox larger and all of the spawned gold in the end of the wave will be concentrated in the center - you don't have to run all over the arena to collect it now! :)

Let me know what you think! :D

You could also ad a coin magnet item to craft, if it is not allready  in the game.

ah ok, I haven't played that long yet but I really like it.

I just increased the chance of the Collector item to drop! But there are still 200 other items competing with it... :D

Both changes make for a far better experience.  Thank you!

We can have the "claim option" ?

I just added the option to claim it!

The game will be FREE before the full release on March 22nd. 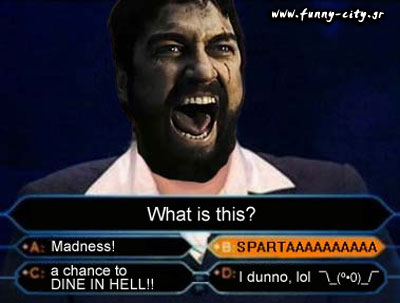 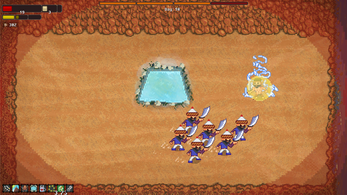 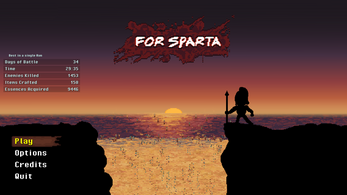 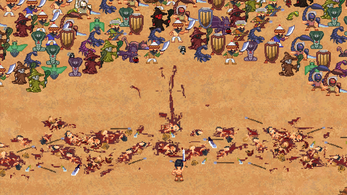 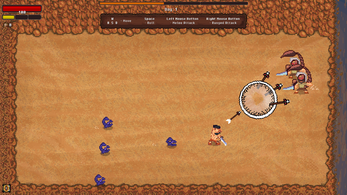 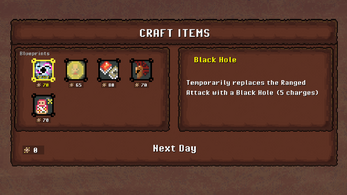 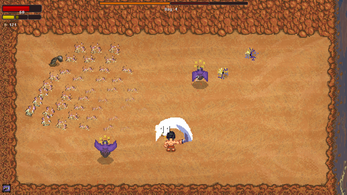 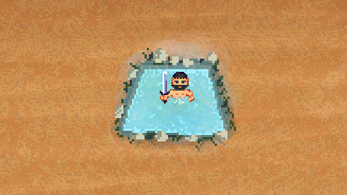